What’s the history of jeans?

Speaking of jeans, people naturally think of the gold rush in the United States in 1849. The Jewish Levi Strauss (Levi Strauss) is recognized as the inventor of jeans.
In 1850, the 501 jeans produced by Levi’s, which he founded, is the originator of jeans known to the world.
1855-The earliest jeans only had a back pocket, and there was no York.
1872-It was initiated to use metal rivets to reinforce the stressed parts of jeans.
1873-Jeans changed from gray to indigo blue. The back pocket is decorated with orange double arch stitches.
1886-The logo on the back waist plate was changed from a dwarf to two horses. 1890-Add a watch pocket and back York.
1893-Whitcomb Jobson (Whitcomb Jobson) invented the zipper.
1905-With the addition of a second back pocket, so far the jeans have five pockets in the form of fixed.
In 1922, a belt loop was added to the waistband.
1926-Lee company produced the world’s first zipper jeans.
1937-The rivets of the back pocket are hidden inside.
1941-The rivets on the lower part of the front opening of the jeans were removed. During World War II, the back waist bow and watch pocket rivets were removed, and the double-arch stitches of the back pocket were replaced by printed similar graphics. A bay leaf replaced the logo “L.S.&Co.S.F.Cal.” on the button.
1947-Arched stitches reappeared.
1950-In order to follow the fashion trend, the trousers were cut into a slimmer style.
1955-Started production of 501 jeans with zippers.
1959-Developed pre-shrunk jeans.
1966-The corners of the back pockets were fixed with bar-shaped short stitches instead of rivets.
1971-The red sign changed from Xiang “LEVI`S” to Czech “Levi`s”.
1983-Due to the improvement of the loom technology, the width of the door was widened and the red trousers disappeared. 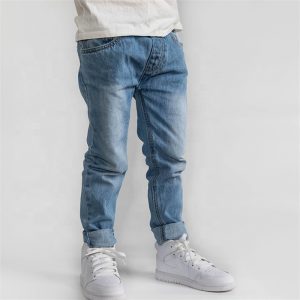